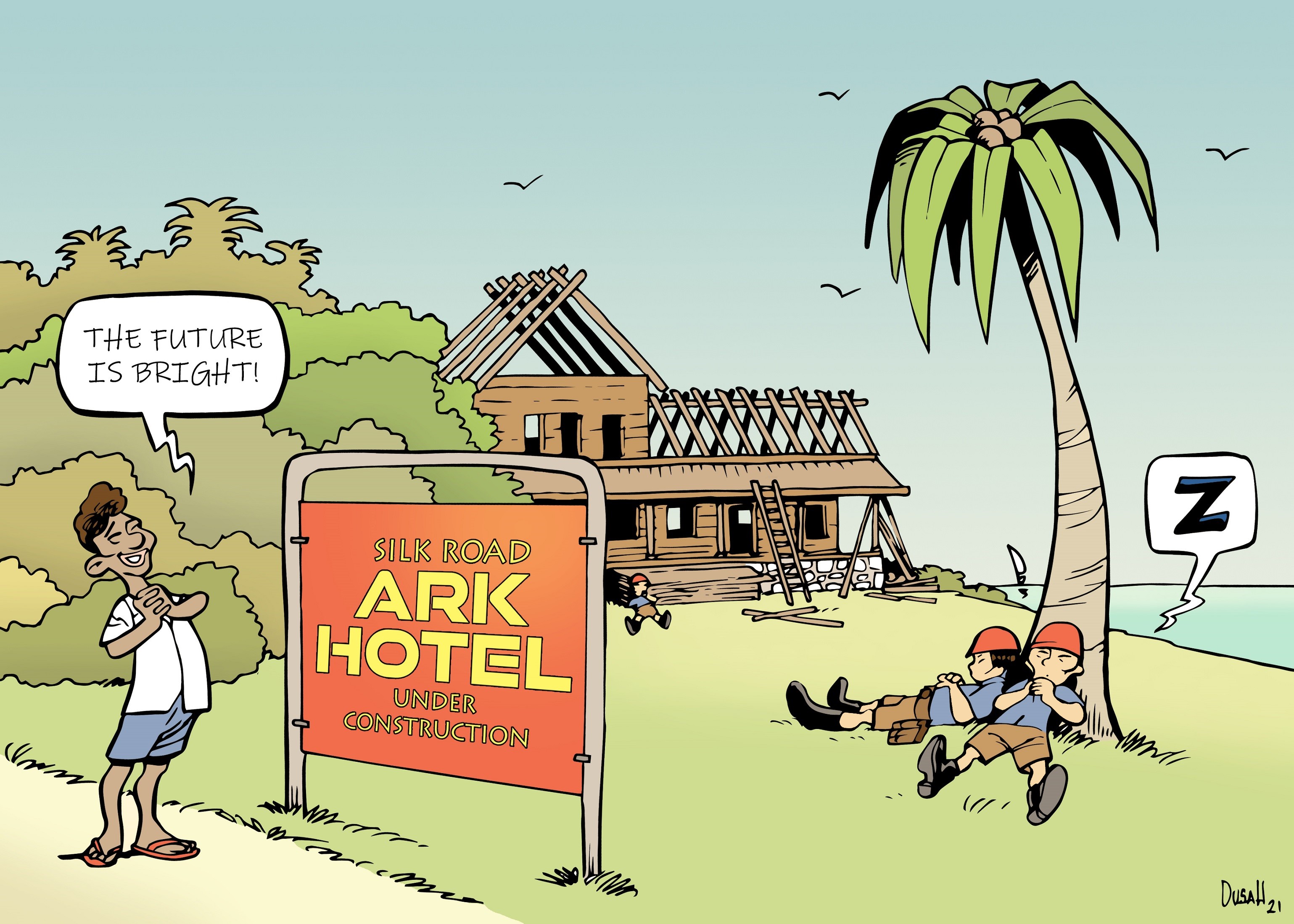 I have become increasingly interested in how space can be filled with and hold emotion. In my research, I have been exploring how the political suppression of indigenous Fijian (itaukei) forms of governance in post-coup Fiji affects how urban spaces “feel.” For many (not all) itaukei Fijians, Fiji should be governed according to indigenous ethnic principles. I have found that everyday itaukei Fijians imbue market stalls, suburban homes, shopping malls, and food courts in Suva City with an emotion of prideful defiance against the multi-cultural principles that the Fijian government is implementing. The emotion itaukei Fijians imbue into urban spaces connects them to ethnic forms citizenship that the Fijian government is actively trying to deny. On the other hand, the Fijian government has imbued the same urban spaces with the emotion of apprehension as a result of their suppressive policies. The meeting of these emotions across urban space has had a profound effect on how everyday Fijian life operates (Watt, Forthcoming).

Understanding how space can hold emotion has changed how I think about space and geography. I have found that emotion held in space can be infinitely more consequential than the materiality or utility of space (See Street, 2012; Thien, 2005; Davidson and Milligan, 2004).

Realizing the potential of emotion in space was the main reason I wanted to read Szadziewski’s (2020) article “Converging Anticipatory Geographies in Oceania: The Belt and Road Initiative and Look North in Fiji,” which discusses how space can acquire and hold emotion that affect national trajectory and self-image. Szadziewski (2020) argues that the geo-economic ambitions expressed in Fiji’s “Look North” policy and China’s Belt and Road Initiative (BRI) has imbued emotion into Fiji’s national landscape. Their geo-economic ambitions have met in Fiji in a way that has imbued national space with a “hope” of economic prosperity. This review analyses the effect of hope that these narratives have created on the national trajectory of Fiji.

Szadziewski’s (2020) defines anticipatory geographies as “state-driven economic narratives with the potential to reconfigure spaces and identities.” Nation-states create narratives of economic development, which are then disseminated out to the public. The public who consumes these narratives then anticipate the promised economic development and, therefore, view space with a renewed “hope.” By creating these narratives, national trajectories can change from a state of hopelessness to hope, even if materially nothing has changed.

An anticipatory geography of hope has been created in Fiji through the meeting of Fiji’s “Look North” policy and China’s Belt and Road Initiative (BRI). In discussing the formation and interaction of these narratives, we can understand the type of “hope” these narratives have created. We can also understand why the Fijian and Chinese governments thought creating these narratives was necessary and why they have been so compatible with one another.

The Fijian government has adopted a “Look North” policy ever since their final political coup in 2006. The impetus of this policy is to look for alternative development partners and donors for national development. This includes nation-states and financial institutions such as China and the Asian Investment Bank (AIB) who have not been Fiji’s traditional development partners historically. This “Look North” policy was created because immediately after the 2006 political coup, Fiji’s traditional donors such as New Zealand, Australia, and the United States temporarily abandoned Fiji. Looking for alternative development partners was necessary in a context of political isolation.

In general, Fiji has been successful in finding these alternative partners. Through expanding its development partners who are willing to invest in Fiji, “look north” has turned the notion of economic pessimism on its head. Sandra Tarte’s (2010) work is a great place to start for more context on Fiji’s “look north” policy.

On the other hand, the Belt and Road Initiative (BRI) is a global infrastructure development project that was initiated by China in 2013. The project aims to develop and connect China to global commodity chains. China has an increasing appetite for resources due to the sheer size of its population and increasing consumer demand. The BRI ensures that these resource demands will continue to be met. However, the project requires China to foster international relationships on the international stage to create such linkages. The formation of these linkages relies upon becoming a reputable diplomatic partner. Therefore, as much as the BRI is about creating material global infrastructural connections, it is also about creating a narrative of being a mutually supportive development partner on the global stage.

Comparing the two narratives that “look north” and the BRI, it is easy to see how they are compatible strategically. The Fijian and Chinese governments need each other to activate their narratives. For China, Fiji is of course one of many global partners needed to activate the diplomatic narrative of its BRI initiative. On the Fijian side, China is not the only target in its “look north” policy however, it is undoubtedly the major player due to the large amount of capital they could potentially offer Fiji. As a result, Szadziewski (2020) explains that “Look North has been ‘re-placed’ into BRI to co-produce a narrative that permits the ongoing articulation of Fijian interests.” The promise of economic rejuvenation and development attached to Chinese BRI ambition and outlook has since permeated national Fijian space.

Szadziewski led his article with the construction of the “Silk Road Ark Hotel”. The hotel is being constructed by the Chinese state-run construction company, Power China. $500 million USD has been committed to constructing the hotel. The hotel is not the only output of the BRI and look north policy, however it does serve as a symbol of their converging narratives. “The Silk Road Ark Hotel” is frequently cited in media releases concerning the emerging Sino-Fijian relationship. The hotel’s construction was also led by an opening ceremony of large-scale pomp that touted the potential of the cooperation between the Fijian and Chinese governments. Yet, the grounds of the hotel are currently abandoned. The abandoned construction site seems to indicate that there is little substance behind this anticipatory geography. Is the notion of “hope” wholly nullified if the material benefits of economic prosperity touted in these narratives are never realized?

Szadziewski does not seem too concerned about this possibility. This is because for both the Chinese and Fijian government, these narratives are not about whether the hotel is constructed or not. For China, the value in this relationship is about promoting the positive relationship it has with other countries. Until Pacific countries hold China’s feet to the fire about completing certain projects such as “The Silk Ark Hotel”, their completion will not be a priority. Without criticism, China will continue to receive international kudos without any of the responsibility. The Fijian state is also not necessarily concerned about the completion of the project. The Fijian government’s objective is to shift the narrative that they are an independent country that has broken the shackles imposed by its traditional foreign donors. The exercise demonstrates to traditional donors and themselves that they can “choose their own path”. The actual completion of the hotel does not factor into achieving this goal. Optimism is firmly rooted in signalling economic self-determinism and friendship for future possibility. It is not necessarily attached to the material results of this specific project.

The hotel is also not the primary development project that the BRI is all about. It is about attracting capital for harbors, roads, primary goods processing plants ect. The goal of the hotel was always about producing and converging narratives. It is an ancillary part of the BRI in general. Who actually cares if there is yet another tourist trap on the Coral Coast of Fiji or not? The hotel starts the process of “hope”, which quickly permeates to other BRI projects and potentially overflows onto other non BRI projects. Unfortunately however, some of these primary infrastructural projects also go unfinished, or are subject to long delays or are of low construction quality.

The Role of Media in Sustaining an Anticipatory Geography

The Look North/BRI narratives are created by Fijian and Chinese governments. Claims of fulfilling these narratives also come from these governments through media that they firmly control (Singh, 2015; Singh and Prasad, 2008). Its a cycle of narrative construction and self-legitimization. There are of course instances where projects are finished, and self-congratulatory media releases coming from the state are warranted. However these same media approaches are applied to uncompleted projects. This allows empty narratives to remain intact, even when promised development never materializes. This allows hope to continue to permeate the “Silk Road Ark Hotel” construction site, and other sites of national development across Fiji.

In such cases its worth asking, do the Fijian public buy into these state-led narratives? Szadweiski (2020) believes that the public will seemingly go along with the state-based narratives and beliefs. Szadweiski relies heavily on theoretical texts which support the notion that states are able to produce “dominant discourses” which replicate and remain dominant. I think this is a rather tenuous argument not supported by empirical evidence in the Fijian context. I believe more thorough research needs to be conducted with Fijian people on their impressions of the Sino-Fijian relationship here. I am currently unaware of any articles that cover the specific Sino-Fijian relationship from the perspective of the general public thoroughly and appropriately. This is an area of research surely needed.

I would hypothesize however that Fijian citizens would have more of a dialectical relationship between political discourse of “look north” and BRI obtained through media, and material reality, such as the unfinished state of the “Silk Road Ark Hotel”. As I stated at the top of this article I agree that more attention needs to be paid to emotion held in space beyond its materiality and utility. But certainly the idea of “material failure” would also contribute to what emotions Fijians attribute to certain spaces. Materiality and its interplay with discourse at least needs to be more directly acknowledged by Swadweiski here.

The Effect of Hope on National Trajectory

I have some reservations on Swadweiski’s (2020) perspective on the extent of influence of state-based narrative in media, and his lack of attention to Fijian engagement with materiality. However, I am compelled by his argument that emotion such as “hope” can be injected into national geographies through state-led narratives. This leads to a few additional questions. What are the effects of hope on the national trajectory of a country like Fiji? Could the notion of economic possibility have the power to inspire local development? Could the notion of hope embedded in foreign economic conceptions of development serve to fuel counter-narratives about the denigration of traditional values in space? I believe the “look north” and Belt and Road Initiative (BRI) narratives, and the emotions they embed in space, will invariably affect the national trajectory of Fiji in profound ways that we should continue to track.

For more analysis on the Pacific-Chinese Development relationship, check out another one of our article reviews here.

*This is an article review where we express our interpretations of the article. Our interpretations are supplemented with our own academic and personal knowledge. We welcome any clarifications in the discussion section below*

The project is funded by the European Research Council (ERC) under the European Union’s Horizon 2020 research and innovation programme under grant agreement No. 802223