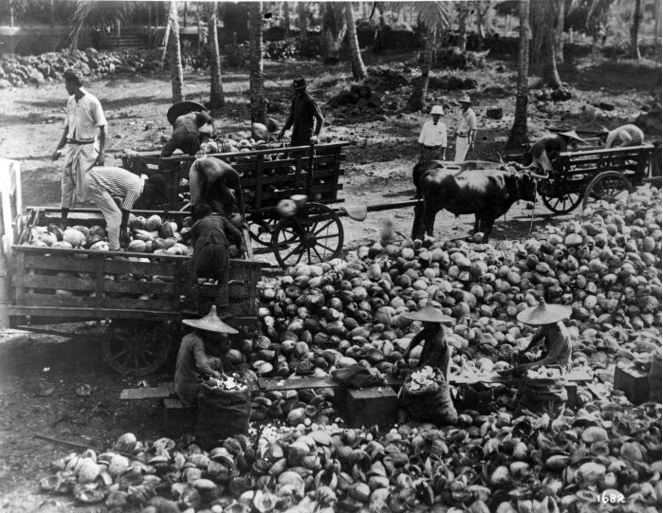 In this review Roxane de Waegh engages with Sheng and Smith’s (2021) material on the founding of a Chinese diaspora in the Pacific in the colonial period through to the independence period. She, like the authors, argues that through competition and gaps in authority in colonial administration of Pacific colonies, Chinese settlers were able to carve out successful trading livelihoods in the region. Lucas Watt assess the degree of migrational continuity of the Chinese diaspora in the Pacific. He argues while there is certainly an under-appreciated continuity of Chinese migration in the Pacific, it is nonetheless a loose continuity. In this review he explores the geopolitical implications of the the perceived and real migrational continuity of Chinese in the Pacific. In a previous article, we reviewed a chapter by Maclellan (2021) in the same edited book, the China Alternative, which discussed Chinese influence in the French Pacific which highly relates to this review.

Wars, geopolitical changes, and the colonial rule of European powers: A recipe of opportunity for Chinese migrants in the South Pacific – Roxane de Waegh

Historically, from a geopolitical perspective, the Pacific nations were never a major destination for the Chinese nor were they crucial to the development of China’s foreign relations. However, the Pacific was one of the earliest regions to accept Chinese migrants, and it is still absorbing new migrants today. Even though the absolute number of Chinese migrants remains small, their scale and impact on the changing geopolitics of the Pacific should not be underestimated – especially given that China has just added the Pacific to the maritime silk road in November 2014 as part of China’s international strategy. In their book chapter, Sheng and Smith (2021) bring into focus one of the more contentions aspects of China’s engagement with the Pacific, migration, and question the sharp distinctions between the ‘old’ and the ‘new’ Chinese communities in the Pacific. This review will focus on (1) how China was dragged into the Pacific region as indentured laborers and forced into the global colonial system built by European capital, and (2) how China was able to use the very same colonial powers and shifting geopolitical situations to their advantage.

The influx of Chinese migrants into Oceania and their impact on the Pacific began when China started to deploy its labour resources according to the needs of the global market. Chinese migration to Oceania began in 1848 when indentured Chinese laborers were transported from Xiamen to the colony of New South Wales to pursue the gold rush (Fitzroy, 1849). At this early stage, there were two main types of Chinese migrants – the individual migrants, largely going to Australia, and the second type, which were Chinese laborers recruited by colonial labour companies. The second type of Chinese migrant quickly increased in numbers as the commodification of Chinese labour was legalized after the Second Opium War. Foreign merchants, mostly colonial powers, were no longer prohibited from recruiting workers directly from China. Simultaneously, Pacific Islands were claimed and developed by European powers, driving the demand for plantation labour. The spread of Chinese migrants to the Pacific Islands was the result of the Western colonial project and their control of the Pacific exchange network (Sheng & Smith, 2021). However, the Chinese migrants, both free and forced, took advantage of this emerging maritime traffic to establish their own transnational networks. The maritime colonial network dominated by the western powers, utilized for the increasing commodification of Chinese indentured labour, broke down in the 1940s and the development of overseas Chinese communities in Oceania entered an important transition period (Sheng & Smith, 2021).

At the end of the second world war, the Chinese indentured labour export system, with its overtones of slavery, was completely abolished in the Pacific (Sheng & Smith, 2021). During the post war years, the Chinese migrant community intensified their engagement with the Pacific Islands as they dispersed throughout the region. More importantly, between 1960 and 1980, most of the island nations of Oceania achieved independence or autonomy, leading to the adjustment of their immigration policies and a desire to attract foreign investments as means of building modern nation-states (Sheng & Smith, 2021). The changes brought by the independence of the Pacific Island States and their establishment of diplomatic relations with either the People of Chine or the Republic of China (Taiwan) created new opportunities for the Chinese to establish their status and expand overseas exchange, especially in Vanuatu (Kumar et al., 2011). Unlike other pacific island colonies, Vanuatu was under the joint management of Britain and France. Even though the two colonial authorities cooperated, they also displayed mutual restraint and competition, which Chinese businesses exploited (Sheng & Smith, 2021). The French authorities limited the penetration of the British forces in various ways to compete with Britain, thereby giving Chinese merchants more scope then in Solomons or Papua New Guinea where colonial authorities restricted Chinese merchants to favour British trading companies. The case of Vanuatu indicates that the colonial rule of European powers created opportunities for Chinese settlers in the South Pacific.

It is always interesting to explore the shift in control, and the opportunities that rise in the absence of a dominant power. Changes in the geopolitics of the Asia-Pacific region, including the Pacific War and the Cold War, greatly influenced the Chinese Pacific Island diaspora, and gave the population of neighboring Asian countries an opportunity to expand their trading network. The combination of war, dependency, friction between colonial powers, geopolitical changes, and the maritime traffic between the Pacific Islands enabled the Chinese to establish their status and overseas exchanges while shaping their business-led livelihoods. The global pandemic of COVID-19 will un-doubtably lead to significant geopolitical disruptions, loss of control, and subsequent shifts in power. Future research should aim at understanding the increasing migrant population in Oceania coming from Southeast Asia, especially the Philippines, and the evolving roles played by migrant communities, especially given the recent global disruption of COVID-19.

A Significant but Loose Continuity of Chinese Migration in the Pacific: Regional Geopolitical Implications – Lucas Watt

The most interesting part of Sheng and Smith’s (2021) article for me was how they described the relationships between “old” and “new” Chinese migrants in the Pacific. In the context of Vanuatu they describe that there is a dividing line between old and new Chinese migrants, defined around 1980. This distinction is associated with a change in immigration policy whereby Chinese immigration starts to spike around this time period. With many Pacific nations becoming independent, immigration laws relaxed allowing laborers from heartland China to migrate to the Pacific for various resource development projects. More recently this labor migration has been attached to infrastructural development projects. Middle class migration from China is increasing in frequency as well. These new Chinese migrants are typically considered very different to prior Chinese migrants who were descendants of Chinese indentured laborers. The implications of defining Chinese migration according to old and new emphasizes a lack of continuity in Chinese migration to the Pacific. Sheng and Smith (2021) detail that the network of old and new migrants, at least in the context of Vanuatu, are more connected than is typically considered through biographical accounts.

Particularly compelling was how old male Chinese migrants in search of Chinese wives had to acquire them from mainland China. This entailed them searching for their wives in through networks that linked back to China. More recently, WeChat the mobile communication app popular in Chinese communities was integrated into this process. The resulting marriages of old and new Chinese migrants establishes very direct link between the two communities that Sheng and Smith (2021) argue is by no means rare. The implications of these connections is that old Chinese migrants gain greater connections back to Chinese networks through their wives, and furthermore heartland Chinese culture is further desired and expanded in Pacific communities which old Chinese communities in the Pacific increasingly interact with. Through these marriages, the hard distinction between old and new Chinese migrants start to blur, although this distinction does not disappear altogether.

By establishing greater migrational continuity of Chinese in the Pacific through such examples, this article indirectly contributes to a legitimization of Chinese geopolitical engagement with the region which their population has been connected to for well over a century. We could quibble over what kind of engagement the Chinese state should have with Pacific states in which some of their nationals reside in and networks connect to. However what can be unanimously agreed upon is that this engagement should not undermine Pacific self determinism which many opinion pieces warn about (many in overblown ways). What we have seen is Chinese investment in Pacific infrastructure which, as part of their Maritime Silk Road outlook, better connect foreign Chinese community back to China in ways that allow the nation to secure critical raw resources such as timber and fish (Brant, 2013). Such infrastructural projects make sense in a context where Chinese residents are and have historically resided. Large waves of new Chinese migration into the Pacific only solidify and are no doubt in part motivated to secure this normative position.

As it currently stands I argue that the historical continuity of Chinese migration into the Pacific does not reach a threshold which justifies large scale penetration into the Pacific. Despite what is portrayed in media and reactionary security policy documents, Chinese investment is still quite low compared to Australian and even New Zealand investment in the region. This Lowy Institute piece really puts Chinese investment in Oceania into rational perspective. In what is my own personal opinion, the proportionately small amount of investment from China into a region of loose historical connection is currently justifiable and appropriate. It is further justifiable in a context where the influence of other developed nations coming out of the colonial period have arguably had a more restrictive affect on the self determinism of Pacific nations in comparison to China. This legitimacy of Chinese engagement can of course change depending on context and the nature of engagement in future which should of course be continually assessed. However, what is clear is that Chinese engagement with the Pacific will be in part be determined by solidifying historical migrational continuity into the region (which is by and large a discursive project which Sheng and Smith’s article contributes to) as well as securing future Chinese migration into the region.

*This is an article review where the authors express their interpretations of the article, supplemented with their own academic and personal knowledge. Any clarifications or other points of discussion are welcomed in the discussion section below*

The project is funded by the European Research Council (ERC) under the European Union’s Horizon 2020 research and innovation programme under grant agreement No. 802223