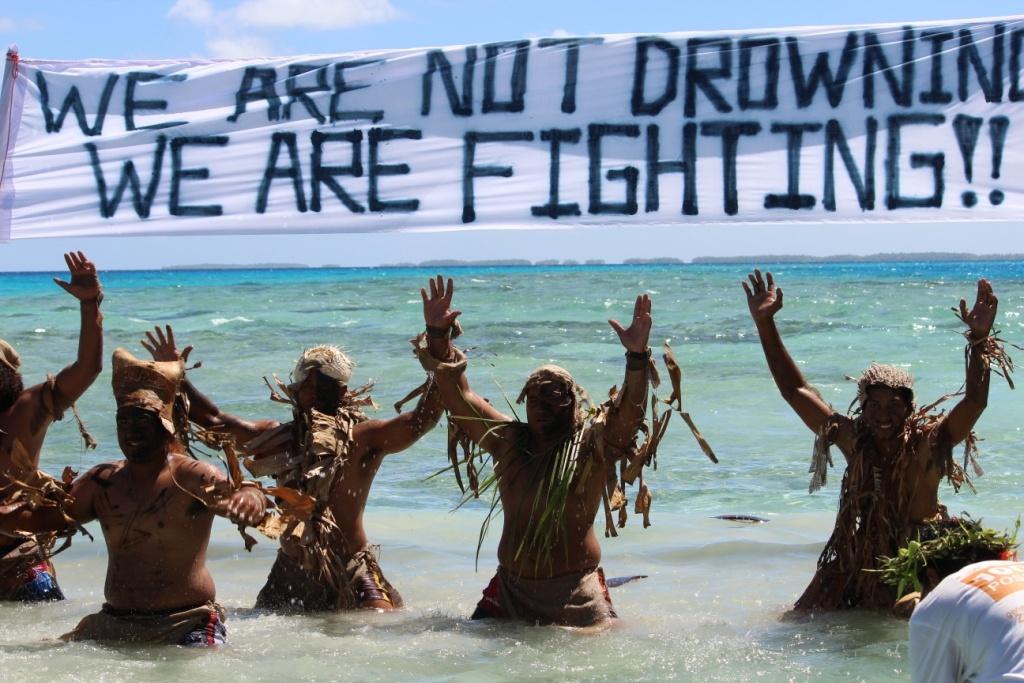 Human agency is the power of people to think for themselves and the ability to make free choices, acting in ways that shape their experiences and life trajectories (Brown & Westaway, 2011). One key argument for emphasizing human agency is that it helps to overcome the view of people as powerless victims of environmental and global change; it recognises that humans are never just passive in the face of threat (Brown & Westaway, 2011). When actors perceive adaptation to and the risk of change as being within their powers to alter, they will be more likely to make the connection of the causes of climate change, thereby enhancing their mitigative, as well as adaptive, capacity (Masterson et al., 2019). Extensive literature claims that human agency and social capital are the necessary glue for adaptive capacity, particularly in dealing with unforeseen and periodic disruptions (Ribot, 2014), such as cyclones, geo-political shocks, and even pandemics.

Social capital describes relations of trust, reciprocity, and exchange; the evolution of common rules; and the role of social networks – which are all inherent values that are deeply embedded in the Pacific culture. For over two decades, scholars have argued that the adaptive strategies of many rural developing areas of the world, faced with climatic and other exogenous globalised risks, is directly linked to social capital, local-level social networks and evolving indigenous management practices (Aldrich et al., 2016). It has also been contended that social capital brings with it an inherent capability to gain access to resources and hence has an explanatory power specifically in the area of collective action for environmental management (Deidrich et al., 2017). Local strategies based on social capital could become more prevalent and necessary, especially for remote coastal communities where governments do not have the resources or frameworks to provide security for their people in the face of unknown risks (Chan et al., 2019).

An important part of exploring resilience and adaptive capacity to disruptions, including climate change, is to first understand the diverse array of changes that communities are undergoing and also the changes that community members perceive as most important to address (Bennet & Dearden, 2013). If individuals perceive a risk and/or adaptation to change as being within their powers to alter, their adaptive capacity is more likely to be enhanced (Adger, 2010). Neglecting to explore the perceptions and interests of multilevel stakeholders towards risk and change can lead to false assumptions about the types, extents, and significance of the various changes that communities are experiencing (Bennet et al., 2017). Furthermore, the failure to consider how different types of change interact and undermine the ability of individuals to cope with multiple stressors may lead to interventions which in themselves act as stressors (Bunce et al., 2010a).

In the context of global climate change and the environment-migration nexus, the republic of Kiribati exemplifies this theme of human agency by setting a pioneering role in global endeavours seeking climate justice (Klepp & Herbeck, 2016). Kiribati’s moto and strategy to ‘’migrate with dignity’’ seeks to promote a socially acceptable, culturally sensitive and solidarity expressing way of coping with the current and future effects of climate change. The government of Kiribati has decided to take proactive measures regarding the future inhabitability of the territory by planning a long-term evacuation of all its citizens, the I-Kiribati, which has already begun and is to be carried out with dignity and self-determination (Rimon, 2015). On an international discourse, Kiribati and members of the Alliance of Small Island States (AOSIS) and Small Island Developing States (SIDS), emphasize that they have made very few contributions to climate change crises but are now affected severely by its consequences. They demand that they are equipped with the appropriate tools to cope with the effects of climate change and to make their own decisions on the basis of self-determination. The citizens of Kiribati, according to President Tong’s government, refuse to accept a humanitarian refugee status as a basis for their future, calling instead for migration programmes that should be responsive to a more dignified conception of agency: the citizens do not view a life of dependence on host societies and refugee centres as acceptable options (Leckie, 2011).

This post-colonial perspective held by various small island states across the world contradicts the global norths’ position which characterizes climate change impacts on migration as being a security threat, or as a purely humanitarian and development issue. By reducing migration decisions to environmental factors, the industrialized global north is at risk of neglecting the interaction between different factors of a cultural, political and social nature that form the basis of migration decisions (Klepp & Herbeck, 2016). The transfer of the issue of environmental migration into a developmental and humanitarian framework outsources the problems geographically and politically and could prevent the politicization of the discourse (Klepp & Herbeck, 2016). While the global north depicts migration as being unavoidable and independent of the agency of migrants, small island states tend to support the autonomy of migration approach, which demonstrates a social movement and creative force within a global economic system (Boutang, 2007) and emphasizes the critical role of human agency, solidarity, and self-determination. Furthermore, the autonomy of migration approach focuses on the social impacts of climate change and point to developments that might further exacerbate differences between industrialized and developing nations (OECD, 2009). These types of social impacts, also known as multidimensional inequalities, are not the kind of impacts that the global north is ready to address or take responsibility for.

Avoiding responsibility and the increase of solidarity

The global north’s limited contribution in addressing the future social impacts of climate change is exemplified in both New Zealand’s and Australia’s labour and education migration programme. Both donors, Australia and New Zealand, are supporting the education system in Kiribati and creating work programmes for citizens of Kiribati, mainly in the field of harvesting operations (Immigration New Zealand, 2015). However, while the Kiribati government officials described these labour and education programmes as climate change adaptation strategies, the donor countries explicitly refuse to acknowledge any link between these programmes and environmental migration (Klepp & Herbeck, 2016). This official denial demonstrates how pressing the debates around environmental migration and the hosting of future migrants in the Pacific are. It appears that the global industrialised powers are more interested in offering piecemeal solutions that are limited to the spheres of humanitarian responses to climate change and wider development discourses. The dichotomy in perspectives, priorities, strategies, and roles between the small island states and the global north emphasises the political nature of climate choices and reconnect global negotiations to questions of fair burden sharing in adaption (Klepp & Herbeck 2016). Furthermore, the observable circumvention of political aspects through Western development cooperation obscures questions of regional and global responsibility and solidarity, as well as historical and current power relationships and dependencies (Ferguson, 1990; Klepp & Herbeck, 2016).

However, while the global north continues to strategically avoid the social-political nature of the environmental migration discourse, there appears to be an increase in Pacific solidarity and trans-regional support in order to be more self-reliant and independent of the colonial powers. This movement towards Pacific solidarity was demonstrated during the United Nations Framework Convention on Climate Change (UNFCCC) in Copenhagen 2009, where representatives of the Republic of Fiji announced that the island state would be willing to host citizens and whole communities from Kiribati (Fiji Sun, 2014). Another example of this new transnational movement is Pacific Voyaging, where traditional cross-border sea voyages are used to create sailing groups from various countries in the Pacific in order to raise awareness about the effects of unsustainable industry, climate change, and other environmental problems (Farbotko, 2012). The Pacific Voyaging movement and Fiji’s willingness to host citizens and whole communities from Kiribati demonstrate progressive forms of transnational solidarity and new models of citizenship, which all emerged from negotiations around environmental migration. A growing number of voices in the Pacific are calling for a post-colonial, new transnational solidarity and unity movement to reduce the effects of climate change.

The dynamic negotiation process taking place in the Pacific region concerns itself with concrete, local, social and connective questions around climate justice rather than the Western agenda which focuses on development and security policies. However, it remains to be seen whether and how regional answers and solutions for environmental migrants offer the best migration opportunities, and whether these regional solutions will be influenced by the heavily increasing donations from development partners. Despite the positive emphasis of self-determination, agency, and dignity, it is important to note that the aid budget has grown significantly in Kiribati, and across the Pacific region. The resources obtained from the major donors, Australia and New Zealand, have nearly doubled in the last decade (Hunt, 2015). Yet, current South Pacific negotiation processes appear to inaugurate more connective, post-colonial responses into the discussion on environmental migration (Klepp & Herbeck, 2016). Through human agency and self-determination, the island states of the Pacific refuse to be a passive victim of climate change, and are successfully obtaining results by emphasizing transnational solidarity through regional negotiations. However, it is important to address sensitive questions of power when considering the global north’s humanitarian and development perspective on climate change. Climate justice must be linked to post-colonial arguments concerning the political nature of the crises faced by small island states. Future research should aim to reveal the tendency of the global North not to acknowledge responsibility for the social consequences of climate change.

Interview with Rimon Rimon, speaker of the President of Kiribati Anote Tong, on 21 May 2015, in Bairiki, Kiribati.

Interview with Michael Hunt, Deputy High Commissioner of Australia in Kiribati, on 4 June 2015 in his office in Bairiki, South Tarawa.

Interview with Rimon Rimon, speaker of the President of Kiribati Anote Tong, on 21 May 2015, in Bairiki, Kiribati.